“Yeah, awesome!”
me
“What do you mean by 'this is not a real quote'?”
mini-me
“All your websites are belong to us.”
Anonymous
“I will sue you for using my meme!!!”
Cats
“Old computers never die .. their users do!”
ibisum
Known OSDK issues

Issue #37: Crash on parsing 0xif 0
Details: By replacing by mistake a #if 0 by 0xif 0, I ended up with an internal compiler crash (possibly in lex.c around line 535 according to Jylam)

FloppyBuilder
Reported by Dbug the Sun 31st May 2015

Issue #30: Add a way to target specific systems
Details: At the moment Oricutron is always launched in ATMOS mode, having a OSDKMACHINE variable set the -m Oricutron command line would be nice. (See: topic)

Issue #36: Better handling of header removing
Details: Currently fails (using OSDK 1.12) and pauses cmd windows when trying to remove a header from a headerless Tap file. Would be nice to have option to either fail with error message and pause or just copy the source file to the new filename with no error message or pause.

Issue #28: Additional BASIC functions
Details: Some users would like to have additional functions, similar to BASIC, like PLOT, SCRN, etc... added to the OSDK. (See: topic)

Issue #31: OSDK libraries should be system agnostic
Details: At the moment the OSDK libraries only work with 1.1 ROM, running programms that call the ROM will crash on Oric 1 or Telestrat. It would be nice to have some form of compatibility. (See: topic)

Issue #7: Option to specify the start address of the music at runtime
Details: Is it possible to start playing the tune located in certain memory locations?Such as, I can load a big sound data containing music into the memory starting from #6700, and use machine code to play predefined data such as backround music, music to play when player in the game fails etc.Think of 'super mario' game. Music plays during the game, and when the player is died it plays the death effect. This could be done also by loading the data from the disc everytime from different files when needed but slows down the gameplay or demo.. I am asking this also because, in previous version of mymplayer you shared, the player uses music data located after #7600 , now its using the data after #6700 . I have some musics converted according to previous version and located in #7600.. In conclusion, I am thinking of a music play command having parameters such as where is the music data in memory, how many time to play it etc.. such as !TUNE #6700,1 OR DOKE 0,#7000:POKE 2,1:CALL#5600 ( --> play the sound data located on #7000 just once ) Another parameter might be how long data to use or how long music to play in miliseconds.. By this way, different small sound datas can be loaded in different parts of memory and they can be called when they are needed seperately.

Issue #6: Option to play a tune just once
Details: Is there an option to play the tune just once?When I load a music data and give the command to play it ( i.e. CALL#5600 ) it plays the tune again and again until I call #5603.It could be done by calculating the play time and than stopping it but I wonder if I can play it just once..

Issue #34: Tap file that crash on first load but not on second:
Details: This does not happen for all program files but sometimes Oricutron will not properly execute a loaded .tap file and instead display the Monitor window showing the PC stuck at address $24D. When using the monitor to examine disassembled memory, the code is correctly present at address $600.

When that happens, issuing a RESET from Oricutron and typing manually CLOAD"" and re-inserting the proper .tap file is enough for the program to run normally.
For some reason, the first run always fail as described above but after a reset everything works as expected.

As noted, this happens only for one of my program, a 23,370 bytes long .tap file.
I can provide that .tap file and associated symbols file if needed.

Issue #38: Improved AIC converter
Details: It would be nice if the AIC converter supported user configurable combinations of attributes (defined in the picture as the two first pixel columns), and if it was possible to force PictConv to save the two columns with attributes so they don't have to be created by the program. And document that properly with picture examples as well!

Issue #1: Corrupted DSK files
Details: I have no idea why but if you copy files, edit files and the like you end up with corrupted files on the .dsk.

Issue #23: Generated floppies have no free disk space
Details: Tap2Dsk generates floppies that only contain the provide files, without any spare space, that makes it unpractical to generate floppies for games or tools since you can't save any new file.

Issue #17: Windows 2000 compatibility
Details: WriteDsk is a very low level MS-DOS tool, unfortunately it is not able to access the floppy controller when used in a modern Windows system

Issue #19: MASM compatibility
Details: XA now handles correctly the ":" character in comments. The -M (MASM compatibility) option should be replaced by something that does nothing. (See: topic)

Issue #22: .data section not working as expected
Details: If not specified, the .data section should by default start after the end of the .text section, they also should be saved in the binary, but apparently in non-relocatable mode this appears to be broken.

Issue #15: Add advanced commands to the format
Details: to add possibility for simple "in-music" commands like "jump to_xxxx-th_vbl_frame" and "loop 3_times_next_xxxx_vbl_frames". Additionally having such "commands" can help for reducing the size of the YM data (See: topic)

Issue #39: OSDK Preprocessor variable
Details: Is it possible to have a way to give parameter to preprocessor cpp.exe? Like adding a %OSDK_xxxx% to the cpp.exe command line in build.bat

Issue #21: Generated floppies have invalid CRCs
Details: Hi ThomH! I'm glad to read you have tested my game. This CRC bug is something related to FloppyBuilder, so it is Dbug who should fix it.

Issue #25: OSDK version number
Details: It would be nice to output the osdk version something like "Using OSDK version x.x" at the top of the screen when it builds the program, specially when several versions of osdk are installed.

Issue #32: Syntax error in include/sys/sound.h
Details: The "#define NOTE_C-SHARP 2" uses an invalid "-" symbol that does not compile, should have been an underscore instead.

Issue #24: scanf and sscanf do not assemble correctly
Details: When trying to use the 'scanf' functions from the OSDK libraries, XA complains with multiple syntax errors.

Issue #11: Linker does not process include files
Details: If you include files that define labels (ex: the loader data table) the linker will generally ignore them and throw a undefined externals symbols error.

Issue #13: Linker failing to include relative files
Details: While working on Telemon, found out that it was impossible to link a module containing #include "../oric-common/include/asm/telemon.h"

Issue #20: Oricutron fails to start
Details: If the project is not located on the same drive as the OSDK; Oricutron will fail to launch because osdk_oricutron.bat does not point it to the right location. Using START /d "%OSDK%\Oricutron" %OSDKORICUTRON% instead fixes it.

Issue #18: Incorrect tape header
Details: It seems Pictconv produces a header going from A000 to BF40 for a Hires screen, which is 1 byte too much (should stop at BF3F).

Issue #3: The -o0 and -o1 options are doing the opposite of what the documentation claims they do

Issue #2: Missing INIST and DiskName options
Details: Fabrice's version has two options, -i and -n, that can be used to set the INIST startup string and the name of the disk. The version of the OSDK does not have these options.The issue is actually that MAKE.BAT does not pass the parameters: Replacing the call to Tap2DSk by '%OSDK%\bin\tap2dsk.exe -n%OSDKDNAME% -i%OSDKINIST% %OSDKDISK% build\%OSDKNAME%.tap build\%OSDKNAME%.dsk' fixes the issue.

Issue #12: Error with too many #defines
Details: The number of defines supported by XA is limited to 2340, expanding the value to something significantly larger would be welcome.

Issue #9: Restrict available 6502 instructions
Details: At the moment XA allows any 6502 instructions, such as PLX, PLY, PHX, PHY which are not available in the NMOS version of the 6502 used on the Oric. Ideally they should be refused by default, except if allowed from a command line flag.

Issue #35: Support variable frequency retuning
Details: As the mym format became quite multi-platform with players also available for the ZX Spectrum and MSX, it would be great if Ym2Mym could also be used for those platforms so people with real machines can enjoy the tunes of other machines.The sound chip frequencies differ between machines though and the converter already supports converting between 1000000 Hz for Amstrad CPC and 2000000 Hz for Atari ST (-t0 & -t1 parameters).

It would be fantastic if it could also support those other machines' frequencies; 1773400 Hz for the ZX Spectrum (the MSX one I couldn't find).

The way it works now is that the CPC is assumed as a target by default, with the possibility to override this for the Atari ST to be the target.

I think a flexible way would be if a parameter would be supported with which the f requency of the target machine could be specified.

Thank you very much in advance from everyone :D

Issue #5: Option to truncate long YM files
Details: Is it possible to make YM2MYM.EXE truncate the data and stop if music is too large?There are some long .YM musics, when converted to TAP file and loaded they reach the screen memory and even character definition.Maybe YM2MYM can produce .TAP file where data is not exceed after #A000.I know there's an option to define file size but this is just for 'not' using big sized files.

Made with the OSDK
Oricium
by José María Enguita
“An horizontal smooth scrolling shoot-em-up, inspired by the Uridium arcade game” 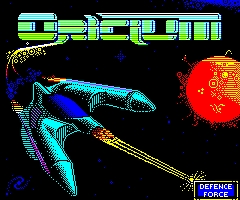